What Jason Mask Does the Hollywood Museum Have? 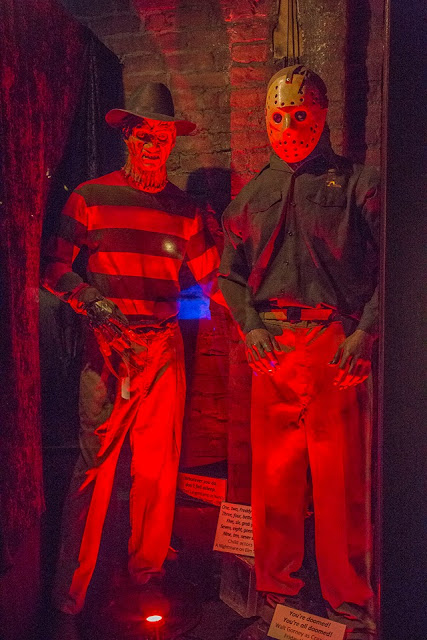 Take a trip to the Hollywood Museum in Los Angeles and in their basement horror dungeon you will see some costume artifacts from the Friday the 13th franchise. The oldest piece in their collection is a mysterious hockey mask that sits on a Jason mannequin often seen with Freddy. The mask has some weird markings and doesn't look like any mask in particular from the films.

Looks can, however be deceiving. Not only did this mask see screen time (for about a two seconds), it very likely gave birth to most of the masks in the franchise that came after it.

The mask has had a small but interesting role in the history of the franchise, having made a handful of random "guest appearances" during the productions of Part 5 and 6. It was also likely recast to create the Part 6 masks, and as such is the "grandfather" of both the Part 7 and Part 8 masks and the great grandfather of the Jason Goes to Hell masks.

First appearance: The "window scene", Part 5. Note the basic characteristics: yellowish color, narrow axe cut, large eye cuts, weird smiley-looking chevron, strapped from the back. You can also faintly make out the characteristic grime across the mouth ascending up the right side of the mask which can still be seen in the mask today. Look reeeeally close at the top of the mask (to the left of the strap rivet) and you can even see the white/gray spot where the paint has been sanded off the clear acrylic to reveal the white coat on the back. The mask today has different straps and red marks but I'll get into that later.

Second appearance: Part 5 TV advertisement, circa 1985. Note the weird chevron, narrow axe cut, sanding around the mouth, large eye cuts and sanding/weathering patterns around the mouth and perimeter. When the mask zooms in, you can also make out the jagged cut of the right eye.

Third appearance: On Bill Forsche's head at Reel EFX studios during pre-production of Friday the 13th Part 6. You can make out the grime pattern across the mouth area.
Fourth appearance: This 1980's Bill Forsche photo of a child with the mask. Note that it is still strapped from the back like it was in part 5, but with a new Part 6-style triangle replacing the old janky one. The Part 6 mask paint scheme was loosely modeled off of this, and it seems likely this mask was used as both a casting and paint master for the film.
Also, see below the original part 6 buck and its resemblance to the Hollywood Museum mask, particularly in the eyes. 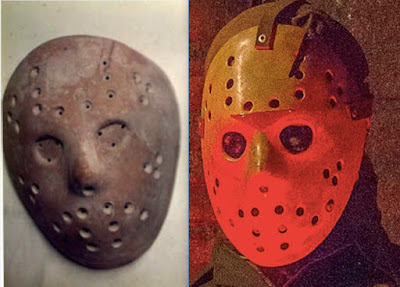 Final appearance: Hollywood Museum, where it currently resides on a decaying part 4 cowl. The Part 6 triangle has been painted over by a larger, cruder freehand version and a couple of extra chevs added to the cheeks. Looks ridiculous but what can you do at this point. The mask also has Part 6 straps, probably as a replacement for the straps that were removed when the mask was recast, and also as an experiment to see how they would look on the final movie masks.
While we don't know the exact origin, we do know this mask first appears in Friday the 13th Part 5, so it dates to at least 1985. However, there are clues that the mask is in fact older.

The mask was painted on a clear blank, as were the Part 3 masks. The construction, narrow shape, sharp molded features and large eye cuts also suggest it came from the Part 3 movie buck. It appears to have been given a light beige basecoat, then another coat of a yellow ochre, which was then sanded off in spots. The yellow tones and deep scratches are similar to the Part 3 stunt mask, and don't resemble any of the masks that are known to have been made for Part 5.

The weight of the evidence suggests it was created as a paint test or spare stunt mask during production of Friday the 13th Part 3 and remained with Reel EFX until director Danny Steinmann wanted an additional mask for shooting during Part 5, supposedly to keep the viewer guessing as to whether Tommy Jarvis was hallucinating or being stalked by Jason. Two chevron changes and a bit of brown paint splatter on the nose suggest it was used as a paint master by the Part 6 FX team before it was donated to the Hollywood Museum.

So if you ever make it to the Hollywood Museum, check it out. You are seeing a screen used mask that was likely a casting "ancestor" to every later mask created through Jason Goes to Hell.
Posted by JL1980 at 8:58 PM

There aren't many props that survive from Friday the 13th part 2. As far as I know the two I just bought are the only two remaining... 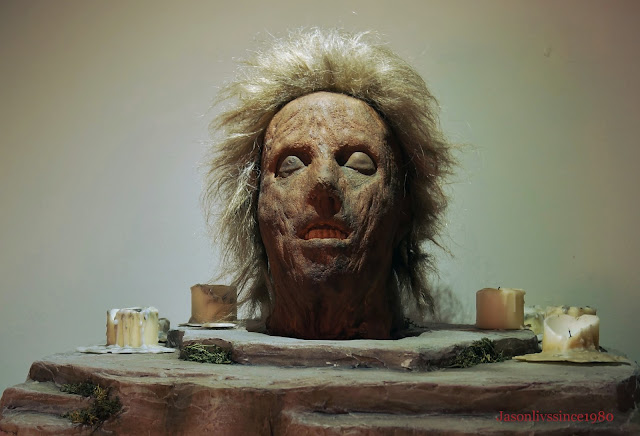